8 Indoor Plants That Will Help Keep Your Home Cool 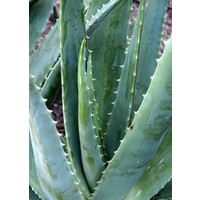 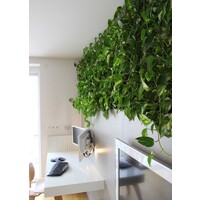 Don't go for good looks alone, choose plants that help cool the air inside your house this summer

Hot summers put the demand for artificial air conditioning into overdrive, but there’s a natural alternative for beating the heat – growing houseplants. That’s right, many houseplants will absorb warm air and release oxygen and cool moisture into the air via the transpiration process. Plants act in a similar way to how humans sweat; when the air around people and plants heats up, they both release excess water into the air from skin or leaves to cool themselves and the atmosphere around them. Some plants will also help flush out carbon dioxide and toxins from the atmosphere at the same time. All this and they’ll beautify the plainest of interiors for not much money. Here are the eight of the best to look for. 1. Aloe vera
Renowned for its medicinal benefits, particularly for skin issues such as insect bites and burns, this amazing succulent has many other valuable qualities. The high water content in its leaves means that when it transpires it releases cool evaporated moisture into the air. Because it also absorbs carbon dioxide and releases oxygen at night, keeping an aloe vera plant in the bedroom will help you sleep better. Another reason for putting aloe vera at the top of the list? Scientists say that it helps remove formaldehyde and benzene from the air too.

Tip: Plants prefer a reasonable amount of sun with regular watering in the warmer months but very little moisture during winter. 2. Bamboo palm (Chamaedorea seifrizii)
This small palm, native to Mexico and Central America, rarely reaches two metres and its large leaves means it can act as an excellent air humidifier.
Bamboo palm is also very good at filtering out benzene and trichloroethylene from the atmosphere.

Another small indoor palm tree that is highly rated for its air humidifying and purifying abilities is the areca (Dypsis lutescens). A mature tree will transpire nearly a litre of evaporated moisture per day. 3. Weeping fig (Ficus benjamina)
One of the few trees that grows well indoors in containers, weeping fig normally grows to about 2-3 metres when kept indoors (higher when planted outside in warm gardens). Its leafy nature means a high rate of transpiration, which keeps the air around a weeping fig moist and cool. It can also decontaminate the air by absorbing any heavy metal particles that are present.

Tip: Position plants in medium light and water regularly during warmer months, allowing the top half of the potting mix to dry out in between. 4. Mother-in-laws tongue/snakeskin (Sansevieria trifasciata)
As well as releasing oxygen during the night to refresh the atmosphere, this sculptural succulent is rated by NASA as one of the best for removing indoor pollutants such as benzene and formaldehyde. 5. Peace lily (Spathiphyllum)
The more leaf area a plant has, the higher the amount of oxygen and moisture it releases during transpiration. The lush leaves of peace lily, especially the larger types, are therefore invaluable for helping to cool the air in a room. Scientists from NASA, the University of Technology Sydney and elsewhere also rate the peace lily highly in their studies of plants that can reduce toxins in buildings. 6. Boston fern (Nephrolepis exaltata)
Many ferns act as natural air humidifiers and Boston fern is one of the best. It’s also a very good air purifier and on the list of plants that scientists have singled out for their ability to clean the air of VOCs (volatile organic compounds) such as formaldehyde and benzene.

Tip: Like most ferns, it does better in filtered light so avoid sunny spots. Early-morning winter light is ideal. Ferns dislike dry air so if your place is heated make sure you mist your Boston fern regularly. 7. Devil’s ivy, money plant, golden pothos (Epipremnum aureum)
With its mass of large, heart- shaped, lush leaves, this evergreen vine from French Polynesia is an ideal air humidifier. It also gets the big tick from scientists for removing indoor pollutants such as formaldehyde, benzene, xylene and carbon monoxide.
One of the most popular indoor plants due to its tolerance of low light and minimal water, devil’s ivy has many cultivars with a variety of different leaf variegations.
Two downsides of devil’s ivy are that its leaves are toxic and in some tropical environments it’s highly invasive. 8. Spider plant (Chlorophytum comosum)
Making a comeback after many years in the style wilderness, the spider plant is deservedly popular with newbie plant lovers as it’s one of the easiest plants to grow. And like the other plants in this story it will not only help cool the air at your place, it will also absorb some of the toxins present as well.

Tip: Happy in bright filtered light or semi-shade, spider plant needs a well-drained potting mix and regular watering in the warmer months. Mature plants produce tiny plantlets on the ends of stems that can be cut off and potted up to create new plants very easily.

We aspire to be your #1 choice for Style & Service

Furniture with "A Touch of Dasch"

Select Afterpay as your payment method

Use your existing debit or credit card

Complete your checkout in seconds

All your need is:

1) An Australian Visa or Mastercard debit/credit card; 2) To be over 18 years of age; 3) To live in Australia

Select Afterpay as your payment method

Use your existing debit or credit card

Complete your checkout in seconds

All your need is:

1) An Australian Visa or Mastercard debit/credit card; 2) To be over 18 years of age; 3) To live in Australia